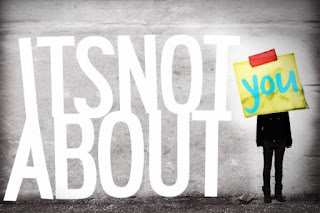 “Don’t Take Anything Personally” is Don Miquel Ruiz’s second suggestion in his book The Four Agreements. I initially assumed he was talking about choosing to overlook negative feedback, as harsh criticism can be damaging to our self-esteem. But further reading highlights this agreement’s connection to the practice of humility.

…And It’s Not About Me
Not only does Ruiz believe that others’ words and actions are about themselves and not about ME, he is adamant that taking other’s truth as our truth is an example of practicing our “personal importance”— a form of selfishness that assumes everything is about ME. He promises that a sense of freedom and autonomy will come from not accepting others’ beliefs about us — good or bad. When we know that what others say is simply a reflection of their own inner world, the lens they are looking through, the ever-running script in their heads, we can become immune to the poison that may be the toxic agreements they have made with Life. We have the responsibility, and the choice, to avoid the suffering that accompanies accepting others’ beliefs as our own. I’m NOT the center of the universe, but I can achieve more centeredness by leaving others’ words and actions to them.